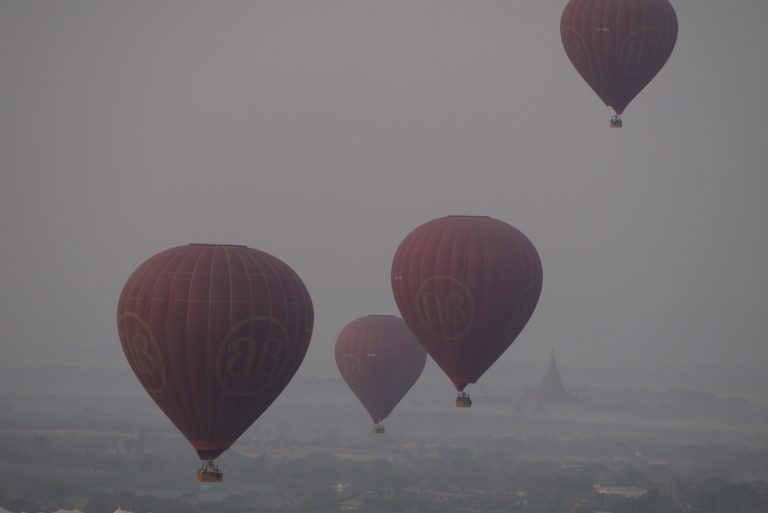 Bagan is no doubt, Myanmar’s most famous tourist destination. It’s home to thousands of temples and pagodas spread across a vast horizon. Bagan can be a bit overwhelming for first-time visitors to explore. Discovering the temples and pagodas can take up a lot of time, but they are truly worth it.

Since Bagan has way too many temples that you can’t see all of them in one go, you must plan your visit well. If you are pressed for time, here are the best Bagan temples to see on your visit.

Spending a couple of days in Bagan should be enough to see the best Bagan temples. On your first day, you can focus exploring the temples on the northern side. Rent a bike and grab a map from your hotel then make your way to the northern gate. Here are the best temples to see on North Bagan.

What would be the best view and location to see the pagodas & ancient temples of Bagan? We think it would be from a hot air balloon ride as the pictures belows shows the pagodas in their magnificent! The complete list of the balloon rides available in Myanmar can be found here. 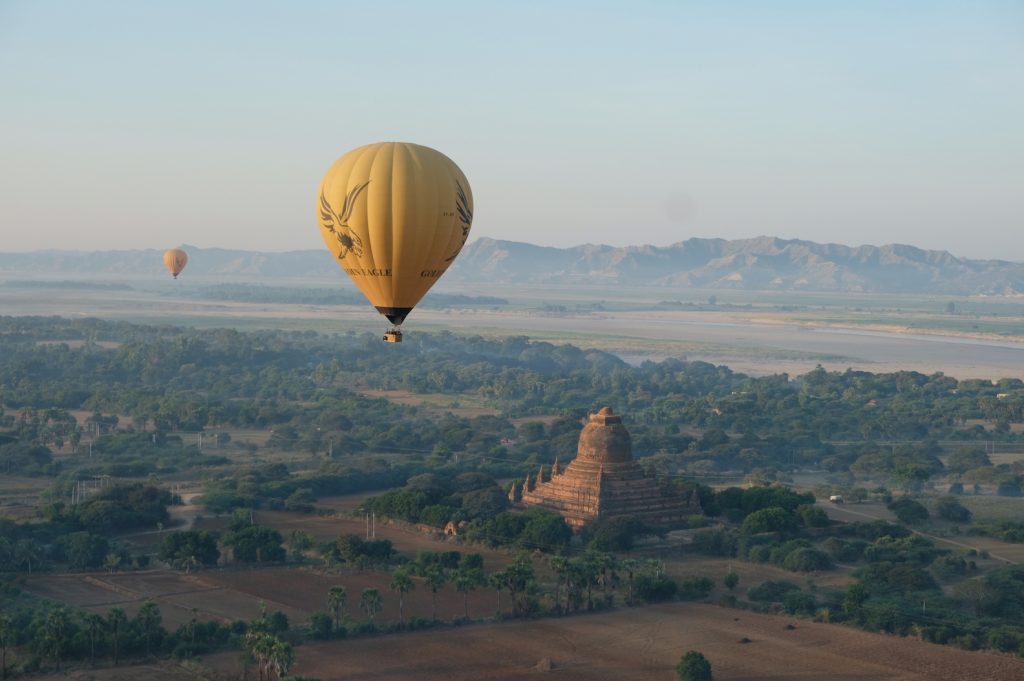 Also known as the Sunset Pagoda, the Shwesandaw Pagoda is where you can catch a glimpse of the most breathtaking sunset or sunrise views in Bagan. This is the best place to witness the colorful hot air balloons lifting off to the sky with tourists on board. The Shwesandaw Pagoda is the tallest in Bagan and was built in 1057 during the reign of King Anawrahta.

To get to the top, you need to climb several steps. The climb is a bit treacherous due to the steep incline. The pagoda was once adorned with terracotta tiles that represent tales from Jātaka. This pagoda houses the sacred hair of Gautama Buddha and one of the most visited pagodas in North Bagan. 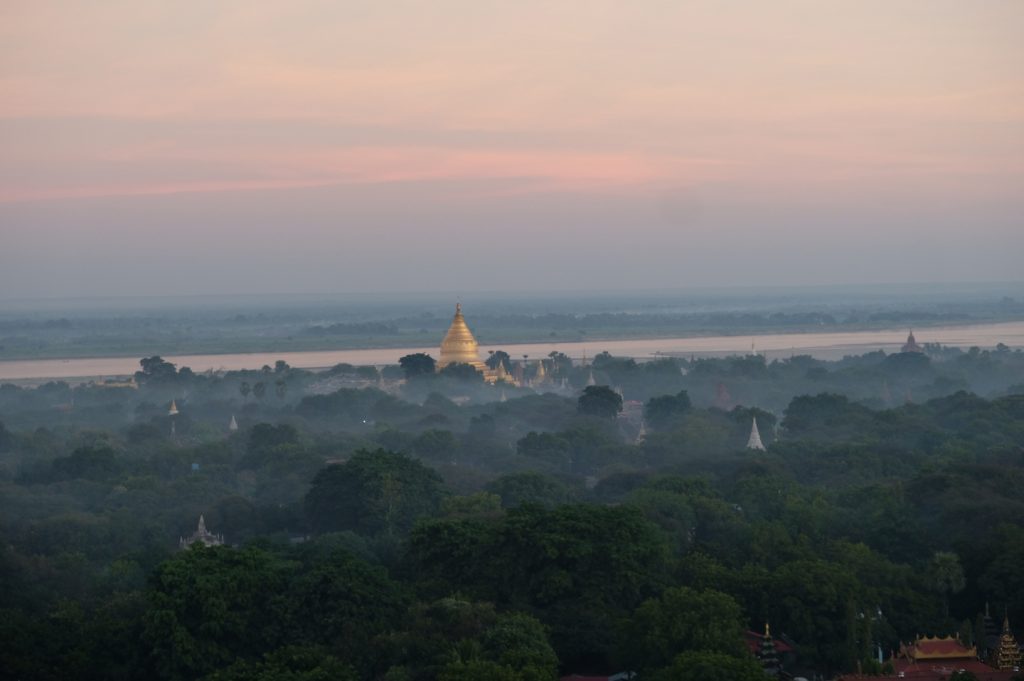 It’s easy to recognize the Shwezigon pagoda since it’s plated with gold and glimmers beautifully under the sun. This pagoda is no doubt, one of the most impressive of all Bagan temples. It is patterned to the many pagodas all over Myanmar, including the Shwedagon Pagoda in Yangon. The pagoda has survived numerous earthquakes including the massive quake that hit the country in 1975 but has undergone numerous renovations ever since.

This stunning gold leaf-covered pagoda was built in 1059 and was completed in 1102 during the rule of King Kyansittha. Legend says that this pagoda holds the tooth and bone remains of Gautama Buddha. Because of this, the Shwezigon Pagoda is considered an important Buddhist pilgrimage site. During the ninth month of the Burmese calendar, the Shwezigon festival is being held here, attracting thousands of devotees from around the world. 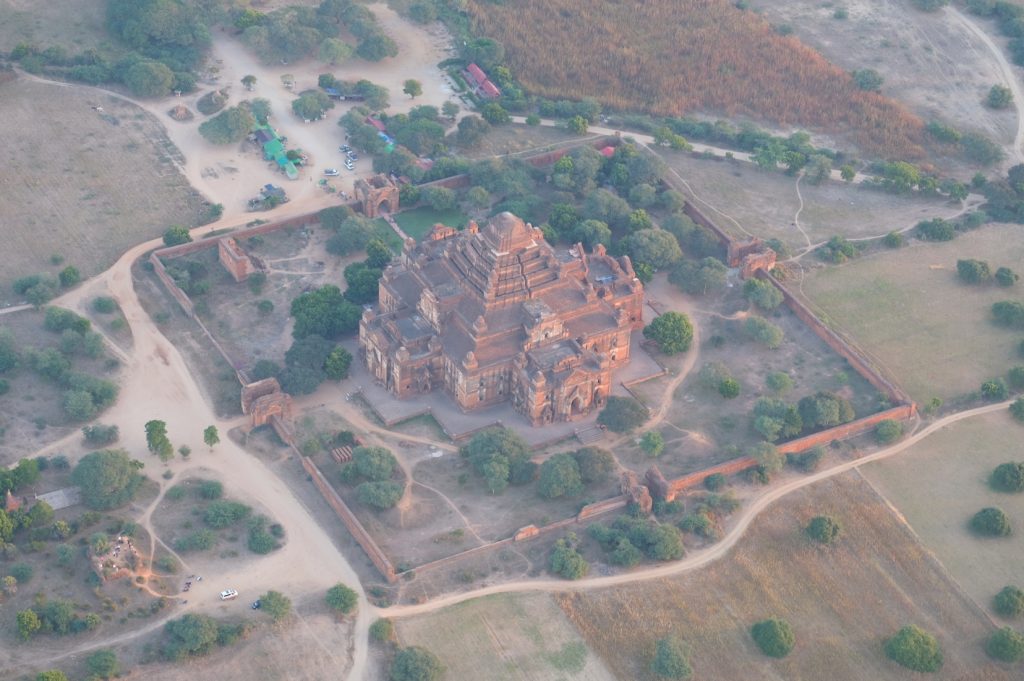 This Bagan temple was named after King Htilominlo who ordered the construction of this temple in 1218. The temple consists of three stories and is 46 meters high. Built entirely with red bricks, the temple is recognized for its elaborate moldings. Just like with most of the Bagan temples, this temple houses a statue of Buddha in each of its gates.

The Htilominlo temple was built in 1211 and was completed in 1231. It’s among the youngest temples of Bagan, having been around for 700 years. The temple has been badly damaged during the 1975 earthquake but has been repaired significantly. Nowadays, the Htilominlo temple is among the most visited temples in Bagan. Inside, visitors can get a glimpse of the original murals from when it was first constructed. 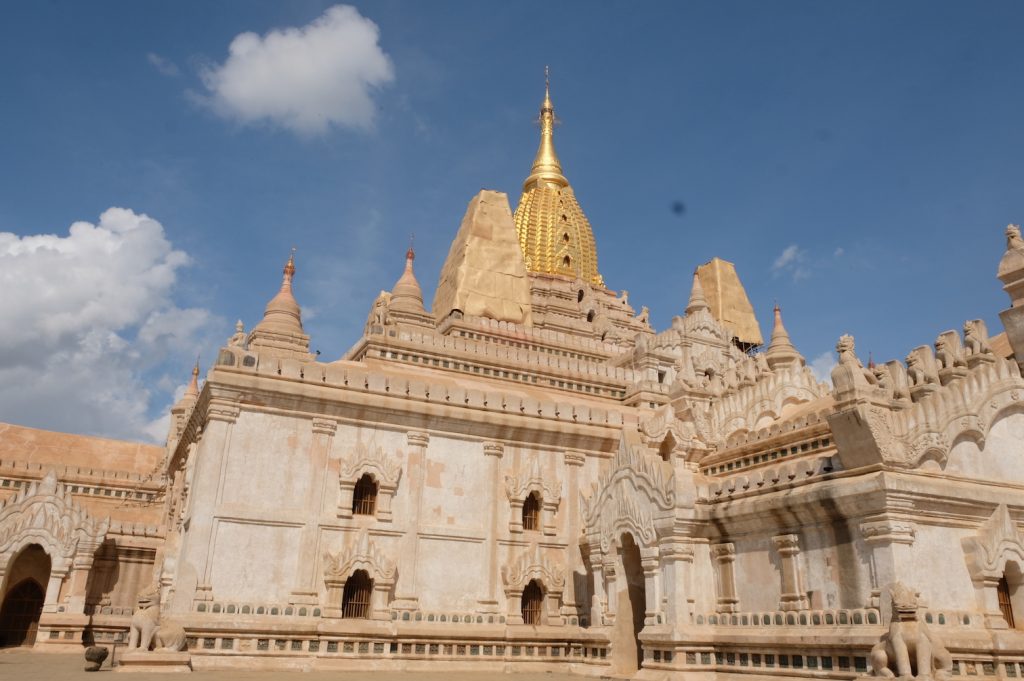 Dubbed the most beautiful of all Bagan temples, the Ananda Temple looks very striking with its whitewashed façade. The temple looks very impressive that it has been given the title, ”The Westminster Abbey of Burma”. It is one of the main temples in Bagan and one of the surviving masterpieces of Mon architecture. The Ananda Temple is also one of the largest, finest, and the best-preserved Bagan temples today so visiting this temple is definitely a must.

Built around 1105 during the time of King Kyanzittha, the Ananda Temple is a perfectly proportioned temple that comes with a central square in the front. Its most distinctive feature is the gilded sikhara, a tower-like spire that’s right on top of the pagoda. Between December and January, a festival will take place at Ananda temple. This event attracts thousands of locals including monks who will chant day and night during the entire duration of the 3-day festival. 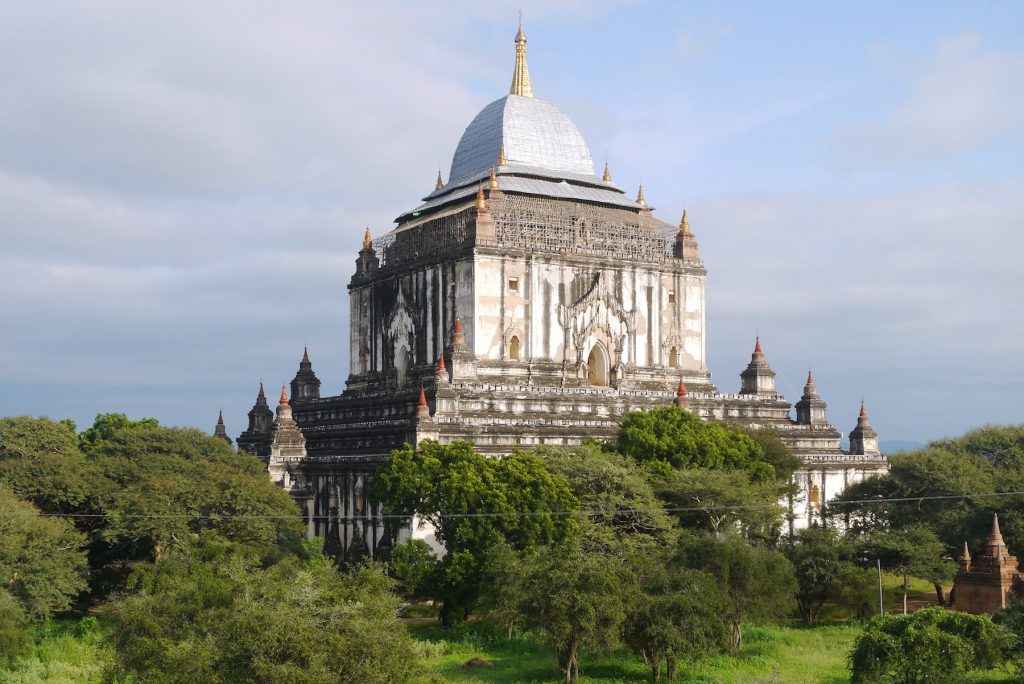 Standing at a height of more than 60 meters, the Thatbyinnyu Pagoda is among the tallest Bagan temples in the north. This majestic pagoda towers the various temples and pagodas nearby. Built by King Alaungsithu during the 11th Century, the Thatbyinnyu Temple is known for its magnificent white facade dominating the entire Bagan plains.

The Thatbyinnyu Temple is a 5-story brick masonry temple with a sikhara tower on top. There are three receding terraces in each story and is decorated with crenelated parapets and stupas at the corner. On top of the terraces at the top-most story rises a spire, that’s surrounded by a slim, elongated stupa.

The Thatbyinnyu Temple was badly hit by the 6.8 magnitude earthquake that took place in the region last August of 2016. It was then renovated with the assistance of a Chinese archaeology team who organized a 9-year restoration project of the temple.

When you’re done exploring the Bagan temples in the north, you can go to the western and eastern areas of Bagan to visit a few notable temples there. Here are some of the best temples to see in this part of Bagan. 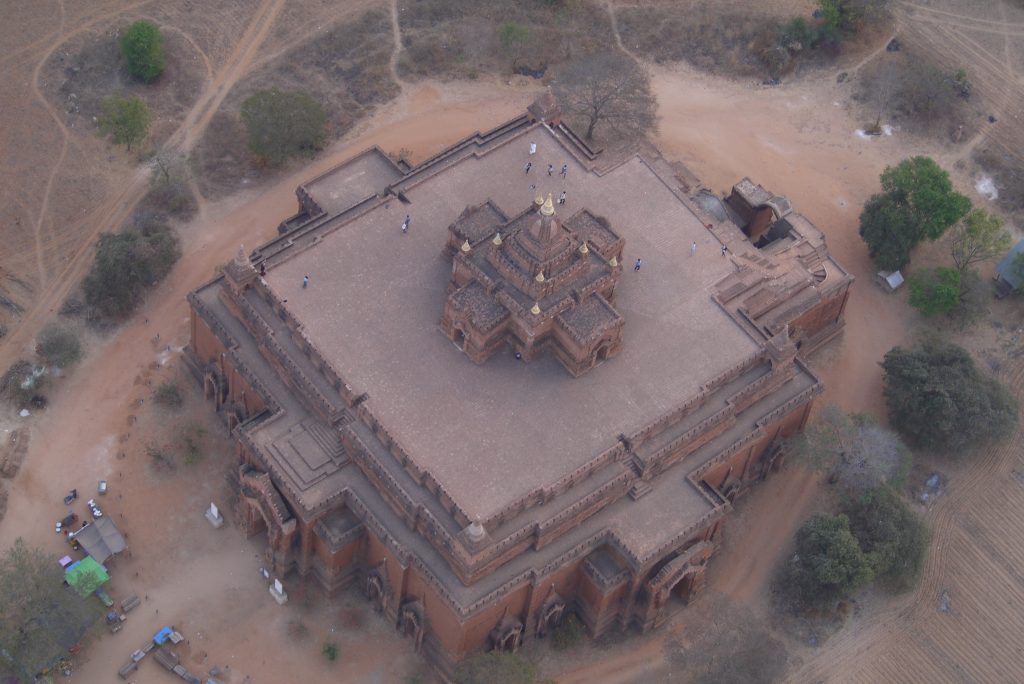 Constructed in 1113 AD under the reign of King Kyanzittha, the Gubyaukgyi Temple represents the Indian influence in Buddhist architecture. For instance, its spire is similar to the spires of Mahabodhi temple in Bodh Gaya, India. Unlike the other Bagan pagodas and temples, the overall design of the Gubyaukgyi temple is pretty unique. All four sides are straight and the exterior walls are covered with stucco, which allows some parts to remain intact.

Inside the Gubyaukgyi Temple, you will find ancient mural paintings that were installed in the ceilings and walls from when the temple was first built. As you explore inside, your guide will share stories about these murals, which were inspired by Jataka tales about the lives of Buddha. 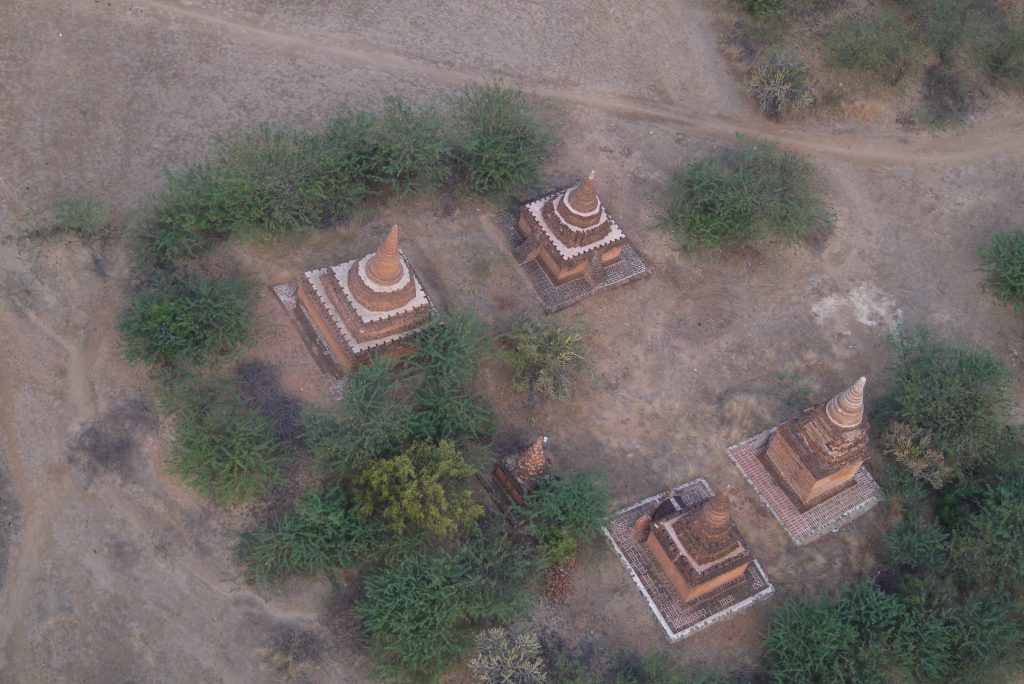 Of all the Bagan temples, the Manuha Temple is perhaps the easiest to visit. That’s because it’s strategically located within the village of Myinkaba and close to the main road. Yet, this temple is pretty unique. The overall layout is different from the other temples and Bagan pagodas.

The temple’s main feature is the 3 chambers that are filled with massive Buddha statues and each statue is painted gold. At the back, there’s an extension of an even bigger chamber occupied by an oversized statue of a reclining Buddha. Built during the 11th century, the uniqueness of this temple makes it a truly interesting place to visit. 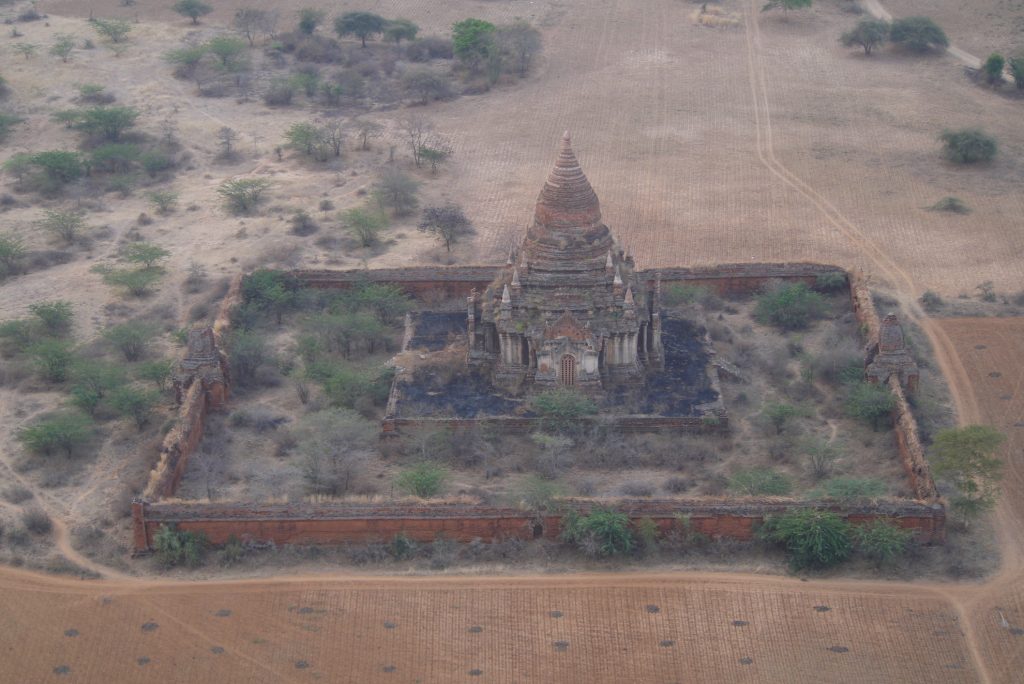 Nanpaya Temple is located close to Manuha Temple. This temple is built entirely of sandstone with intricate carvings. It’s different from the other famous Bagan temples since this is a Hindu temple. One of the most interesting stories about this temple is that it used to house King Manuha, who was held in captive by his nephew, Prince Naga Thaman.

Looking at the temple’s designs, it’s clear that it’s a temple dedicated to Hinduism since the inner chamber has four intricate carvings of the Hindu God, Brahma. It also has carvings of ogres and some other Hindu gods. Nanpaya Temple may not be the grandest or the most beautiful of all Bagan temples, but the intricate stone carvings and the interesting history behind this temple make it worth a visit. 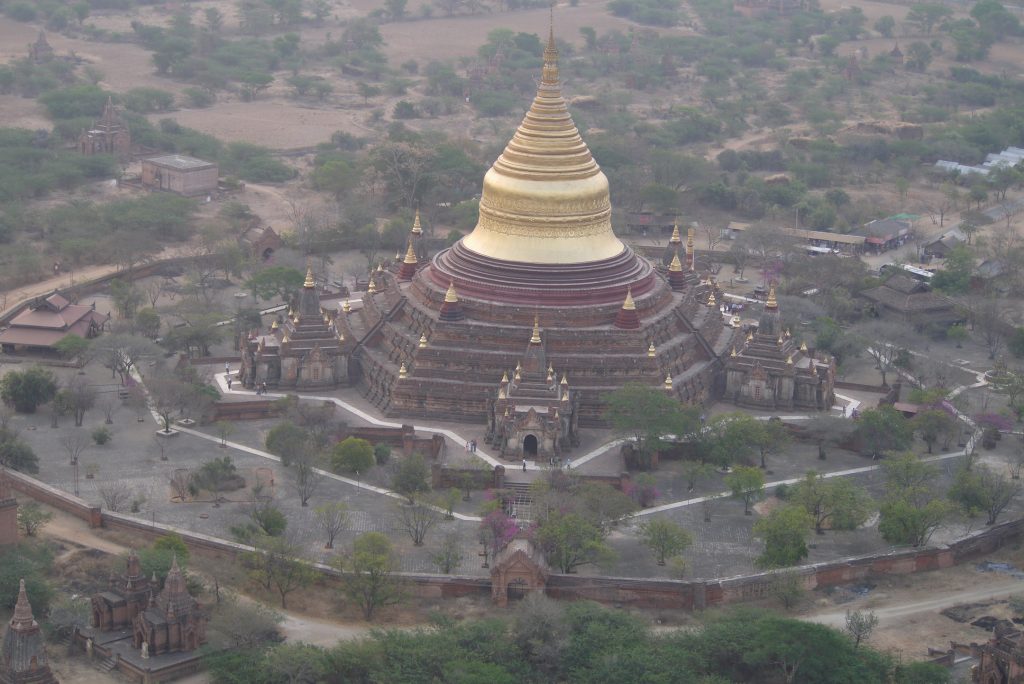 The golden stupa of the Dhammayazika Pagoda is hard to miss. It’s one of the Bagan pagodas that stand out from the rest, especially during sunrise or sunset. This pagoda was renovated during the 1990s, which is when the gleaming gold finish was applied to the massive stupa. During the renovation, they have destroyed some of the original stucco works and only left a little of it.

The Dhammayazika Pagoda is located in the eastern portion of Bagan. Despite its massive size, it only took two years to build the pagoda during the reign of King Narapatisithu in 1196. An estimated 6 million bricks were used in building the pagoda, which features three terraces that features terra cotta tiles depicting the scenes from Jataka tales. 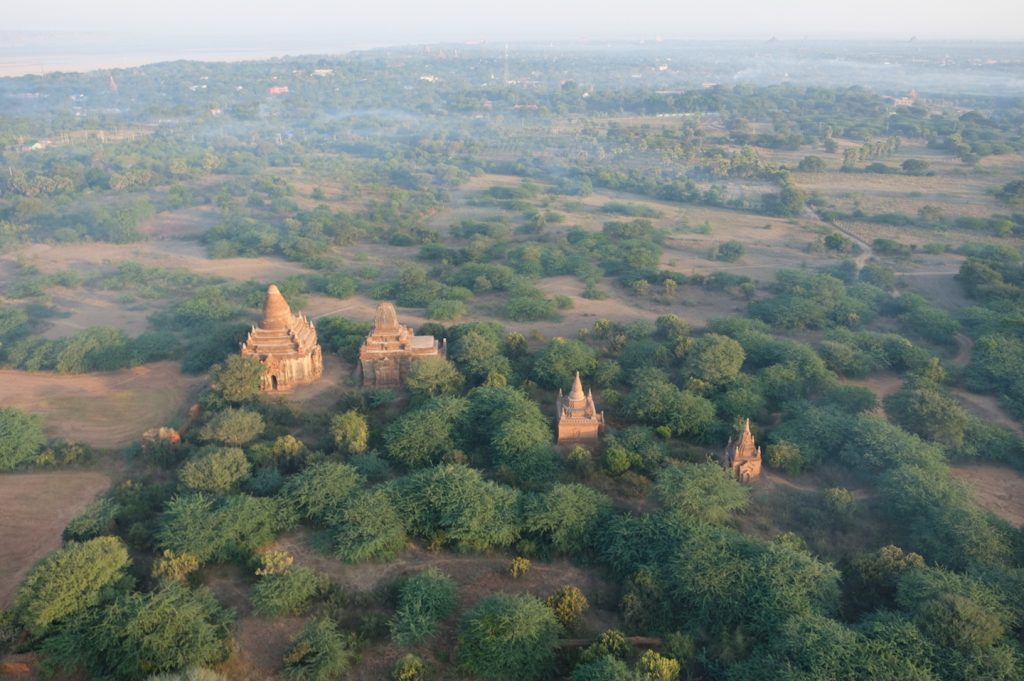 Tayok Pye Temple is one of the most beautiful Bagan temples that were made entirely of stucco. Built by King Narathihapate around the middle of the 13th century, this temple is among the larger temples located in the eastern area of Bagan. The overall layout of the temple consists of a large central core where Buddha statues are erected, with each statue facing its corresponding cardinal directions.

Inside the Payok Pye Temple you’ll find well-preserved frescos that feature different Buddha figures. Some carvings depict stories about Buddhism. The Payok Pye Temple is one of those Bagan temples where tourists are allowed to climb to the top to marvel at the gorgeous sunset views that Bagan is known for.

Can we help you?